back to Germany
back to Europe
back to World Region 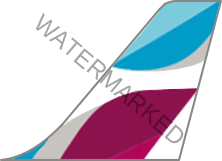 Brief description: Eurowings is a subsidiary of Lufthansa and specialises in low-cost direct flights within Europe away from the hubs in Frankfurt and Munich. Eurowings began operations in 1994 from the merger of the regional airlines of NFD and RFG. In the course of time Lufthansa took over more and more shares in Eurowings. The charter flight division (subsidiary) of Eurowings was renamed into Germanwings in 2002. The Eurowings brand disappeared more and more from the end of 2005, as the aircraft flew in Lufthansa regional colours. In 2014 Lufthansa started the transformation of Eurowings from a regional airline into a low-cost long and short-haul carrier. Since October 2015, the flights of Germanwings and Eurowings have been bundled and have been offered under the brand name “Eurowings” since then.

A selection of aircraft

back to Greece
back to Europe
back to World Region
@
error: Alert: Content is protected !!